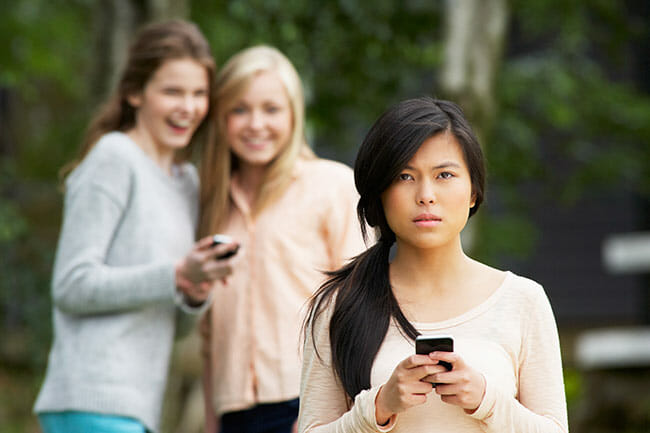 In days of old, bullies’ carried out their shameful hazing in places like the schoolyard or around the water cooler at work. Just as activities from shopping to watching movies have migrated online in the Web 2.0 era, bullies have also increasingly shifted the venue of their torment to the Internet, creating a phenomenon called Cyberbullying that is taking its tolls in schools and workplaces across the nation. According to results reported by the Office of the New York City Public Advocate, 85% of middle schoolers polled indicated that they had been cyberbullied at least once while 70% of surveyed teens reported that they had cyberbullied someone else.

A new twist on an old practice?

Cyberbullying can take many different forms and involves harassment, intimidation, and taunting of some kind via electronic communication such as email or websites. The most popular forums for cyberbullying are social media platforms such as Facebook and Twitter. In fact, there is even an application called Burnbook that appears to be custom-made for cyberbullying, which provides a medium for users to post anonymous insults and other malicious content about others.

Cyberbullying victims can take power back by protecting themselves

While being cyberbullied can be a painful, alienating experience that has even driven some to suicide, the good news is that victims have legal rights. Unlike early victims of Cyberbullying, who faced an uphill battle combatting their online tormenters, there are a number of steps that the New York State Criminal Justice Services suggest victims of cyberbullying take, which include:
* Identifying cyberbullies, even if that requires tracking them via Internet Service Provider;
* Contacting the police immediately if the cyberbully indicates an intention to engage in criminal activity such as threats of violence, extortion, obscene messages, stalking, hate crimes, or child pornography; and
* Contacting school administrators if the victim is a student.

When cyberbullying is severe, victims should not hesitate to seek the assistance of a qualified attorney, who can advise them on the most effective means to combat the offensive actions, in addition to determining whether the cyberbullying has given rise to a cause of action under the law.

Cyberbullying may represent a serious violation of the law

Depending on the particular conduct, cyberbullying may violate a number of federal laws. Schools, for instance, must address cyberbullying behavior when it involves severe, pervasive or persistent conduct focusing on a student’s race, color, national origin, sex, disability, or religion that creates a hostile environment such that it interferes with a student’s ability to benefit from or participate in a school’s services, activities, or opportunities. Among the federal laws that cyberbullying may violate are the Civil Rights Act of 1964, the Education Amendments of 1972, the Rehabilitation Act of 1973, the Americans with Disabilities Act (ADA), and the Individuals with Disabilities Education Act (IDEA).

To reiterate, if you have been victimized by cyberbullying, caring lawyers are waiting to assist you in fighting for your rights under the law.